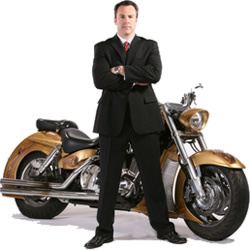 Motorcyclists never want to think about being involved in an accident. Even so, most realize this could happen to them at some point. For this reason, they do whatever they can to protect their body, including wearing a helmet as well as other protective gear.

Passenger vehicle accidents may be more common than motorcycle accidents, but this is due in large part to the fact that there are more of these vehicles on the road.

According to the Centers for Disease Control and Prevention, the number of motorcyclist deaths reached an all-time high between the years of 1999 and 2008.

A recent study by the organization dug up the following statistics:

These statistics are alarming, with many people surprised at just how dangerous it can be to drive a motorcycle.

Can we expect a change in the near future? Despite the fact that motorcycle safety laws are changing for the better, such as requirements to wear a helmet, there is no way of putting an end to these types of accidents. As long as there are motorcycles on the road, sharing space with other vehicles, the chance of an accident remains very real.

Adding to the problem is the fact that more people in the U.S. are riding a motorcycle, which increases the number of these vehicles on the road.

As you ride on your motorcycle, the last thing you want to think about is being involved in an accident. That being said, you should realize the potential for this to happen. By doing so, you will be more prepared and cautious at all times.

Motorcycle accidents remain a big problem in the United States. If a person on a bike is injured, due to the negligence of another driver, they may be able to file a personal injury lawsuit to collect compensation. Contact us if you find yourself in this position.